A Musical Matter: How One Student Expresses Himself

Few people can confidently say they joined a successful band, and even less can say they performed in front of more than 500 people. But Adam Matter can.

Matter, a sophomore psychology major, can be described as a friendly, outgoing student. You may have even met him in class, during a campus visit or maybe you have seen him perform guitar covers at the Lyricist Lounge.

Matter is not a new face to the spotlight. He has actually been performing for more than six years.

“I like playing music for people. I really like music and I just want to contribute to something,” Matter says.

Like many musicians, Matter’s musical career began at an early age. “I got Guitar Hero 3 when I was 7,” Matter says. “And I was like ‘okay, I need to start learning guitar now.’ And I tried, and I hated it.”

But Matter soon grew into his love for music. In middle school, Matter decided to give guitar another shot and “fell in love” with it, and the music.

Since then he has been playing his guitar every opportunity he gets. “Any event on campus where they are looking for anybody to play an instrument or sing, I just go,” Matter says.

From the Lyricist Lounge and Karaoke Knights, to big events like The Fashion Show or Black Girl Magic. Matter has been a part of them all.

On occasion, he has been known to pair up with other student performers, like Victoria Cruz.

One thing many may not know about Matter was that he was part of a band back home in Egypt.

A group of friends created the band “Fakhfakheena,” which he says translates from Arabic into a “native Egyptian cocktail.” The band name truly reflected the music that they played. Just like the cocktail, Fakhfakheena performs a mix of genres.

Not only is Matter a performer, he is also a music teacher back in Egypt. At his sister’s German school, he has taught children ages 12-16 how to play musical instruments, and even performed with them on stage.

“I spent a month of non-stop reherals for it,” Matter says. “My favorite thing was that I taught the whole band the songs on the drums, violin, keyboard, vocals, guitar and bass.”

When asked who his inspirations are, Matter immediately mentions his father with no hesitation. “I’ve loved music my whole life and my dad is one of the biggest reasons why I like music. He’s a big inspiration,” Matter says.

“My dad wanted to play an instrument since he was a little kid, but never could because he couldn’t afford to buy an instrument or have somebody to teach him. So now that he has kids and he can afford it, ‘Y’all learning!’”

This fact is supported by Matter’s older brother and sister playing the drums and piano, respectively.

One of Matter’s big musical inspirations is Travis Barker, an American drummer who is best known for being in the rock band, Blink-182.

“He’s very flexible,” Matter says. “He’s collaborated with Kanye West, Eminem and so many other people. That’s what I like about him. No matter what, he just keeps going.”

While Matter would love a career as a musician, as of now, it is not in his plans due to “risk” involved in the music industry. “…but you never know, maybe in the future,” Matter says.

Who knows maybe one day we may have the chance to see Matter perform on one of the many American stages. 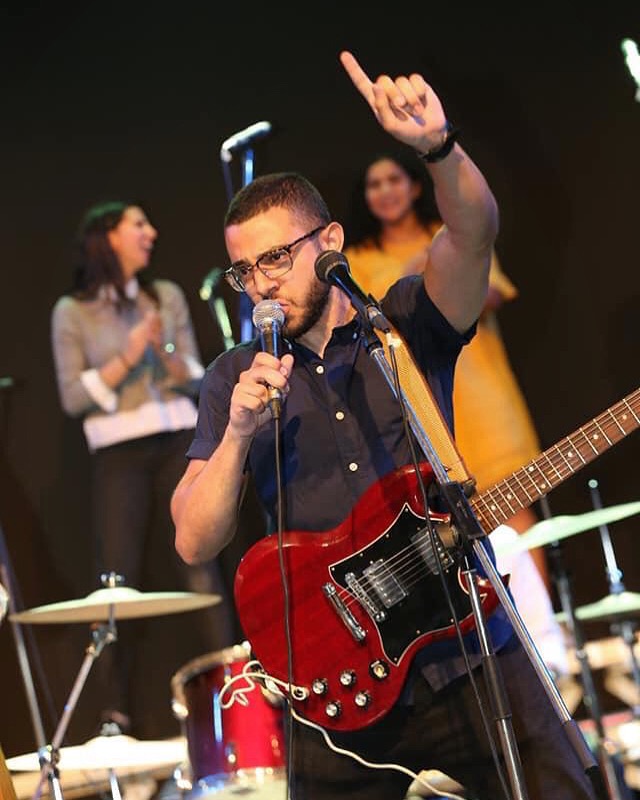 Adam Matter performing at the German School of Alexandiria, Egypt.