Pros and Cons of a Trump America

By Ray White Staff Writer It is no secret that the 2016 presidential election will go down in American history as one of the most controversial and volatile elections this country has seen. When it comes to conversation about President Donald John Trump, there are opinions on both […] 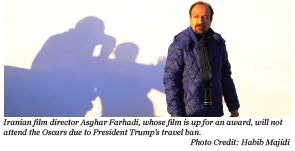 Trump’s Messing with the Oscars

By Armand Butera Entertainment Editor With President Trump’s insistence on an immigration ban on several countries, everyone, especially those who immigrated to the United States, have been walking on eggshells. Although a nationwide halt on the ban was ordered by Seattle federal judge James Robart on Jan. 29 […]

Editor’s Desk: Where is Our Tuition Going?

By Melanie Perez Editor-in-Chief For a school that is so expensive – easily $50,000 a year when accounting for tuition, room and board, and a meal plan – it is sometimes really difficult to see where our money is going (even if a lot of students are attending […]

Melanie Perez Editor-in-Chief Two students have been hit by cars in the same crosswalk on River Road right in front of the FDU campus less than two months apart from one another. The most recent accident was last Wednesday, when Daniel Clarke was hit and injured. Luckily, he […]

By Michelle Maria Oliver Guest Writer It is hard to believe our lovely Anatomy professor has passed away. Time passed, but seemed not to phase her. Strong, bold, and elegant as a pearl, she would be the first one in Dickinson Hall, pulling her Vera Bradley bags with […]