The 2020 presidential election is headed to uncertain territory when it comes to the debates. The first hugely anticipated meeting — with some 100 million viewers expected to view —  is tonight, Sept. 29, between President Donald Trump and former Vice President and Democratic nominee Joe Biden.

The Equinox will live blog the debate for the first time. Major news organizations such as The New York Times and TV news channels (CNN, Fox News, CBS, ABC, C-SPAN, NBC and MSNBC) will also produce their own debate tracker.  “Fox News Sunday” host Chris Wallace will serve as the  moderator.

The topics, while remaining tentative, will likely vary between both candidates’ records, coronavirus, the Supreme Court, the economy, race and violence in the cities, and the integrity of the election.

There are 35 days until the election, and despite the polls being stable, breaking stories still have a chance to alter the course of the race. The debates give an opportunity to create more headlines and news events that can shift our understanding and perceptions of the chances one candidate has over the other.

The debate — and its forthcoming news coverage — can still offer an opportunity for the race to tighten. President Trump needs to keep Biden’s national lead to within 3-5 points to be competitive in the Electoral College because of his coalition among working-class whites that are concentrated in the midwestern states of Minnesota, Wisconsin, Michigan, Ohio, and Pennsylvania.  The debates give him the opportunity to do just that.

Debates are known as a platform for candidates to make their pitch to undecided voters. In previous elections, especially those with a high degree of uncertainty, debates may benefit candidates perceived to have “won” the confrontation and with that, a brief bump in the polls. The bump, however, may be temporary.

The first article of this series, Tracking the Numbers to Understand the Presidential Race, explored national and state polling after the conventions. Then, Biden had a clear national lead of 7 points with a 71% chance of winning the election. A big lead, in the beginning of September, did not translate to an absolute favorite. The reason for this was that there were still two full months before the election for the race to tighten, and President Trump does not need to win the popular vote.

Past Debates Expected to Tip the Scale — But They Did Not

In 2012, polls showed an uptick of support for Republican candidate Mitt Romney after his first debate with President Barack Obama. Things changed in the second debate when headlines announced that Obama bounced back. In the end, the first debate may not have mattered much considering Obama still won the election comfortably.

Debates may not change the election overall. I reached out to Fairleigh Dickinson’s Government and Politics professor Dan Cassino on Twitter to see how the debates can affect the race.

“I’m skeptical that they’ll have an effect this time, barring something truly crazy happening,” Professor Cassino said. “To understand why, we have to look at why the debates generally move the polls. It isn’t because people watching the debates change their minds, [but] they shape news coverage, and that news coverage filters out to people who didn’t watch the debates, and aren’t necessarily paying attention to politics outside of Presidential elections.”

The increase of news might not have the same effect as it once did. President Trump has been in the spotlight for the past five years.

“The coverage has been widely negative,” Professor Cassino said. “If there’s more negative coverage coming out of Trump after the debate, it’s not going to change much.”

What if President Trump ends up having a good debate performance that was contributed by positive coverage?

Debates may not matter in terms of who actually won or lost, but it matters in the news coverage that results from the debate. President Trump needs to tighten the race in the next couple of weeks to improve his odds of winning a second term.

Since debate bounces may fade over a period of time, and with two more debates scheduled, on Oct. 15 and Oct. 22, it is a good sense to take a moment before the start of the debates and evaluate where the presidential race stands today.

State polls share a tighter picture of the race which may be understandable in part of President Trump’s electoral college advantage. A recent ABC News/Washington Post poll released on Sept. 23 showed President Trump leading Biden by 1 point in Arizona and 4 points in Florida. The state average for Pennsylvania, the likeliest state to determine the outcome, only shows Biden up 4.6 points as of Sept. 24, a 2.7-point decrease in his national average.

The race has been steady over the past couple of months and it continues to stay like that heading into the first Presidential Debate. At 9 p.m, the debate will commence with the six 15-minute topics with a chance of rebuttal from the other candidate. There will be a minimal audience in the debates.

G. Elliot Morris, Data Journalist for the Economist, explained the update on the model on Sept. 24. “After our POTUS model picked up a Trump +4 ABC/WaPo poll in Florida today, I was expecting it to move a few points in aggregate. But good polls for Biden in the Midwest + PA counteracted the shift, so the overall pic today (yet again!) is stable,” Morris tweeted.

Nate Silver, the editor-in-chief and founder of the data journalist organization FiveThirtyEight, uses statistical models to try and forecast the results of national elections. He accurately predicted all 50 states in the 2012 election and gave President Trump a higher chance than others to win. Silver examined the use of state polls which he believes can accurately predict the popular vote better than the national polls.

“Since we know how the states vote relative to the nation, we can use state polls to estimate national results,” Silver wrote on the news site. “Florida, for instance, is typically about 3 points more Republican than the average state. So if Biden were ahead by 2 points in Florida, it would imply that he was ahead by 5 points nationally.” 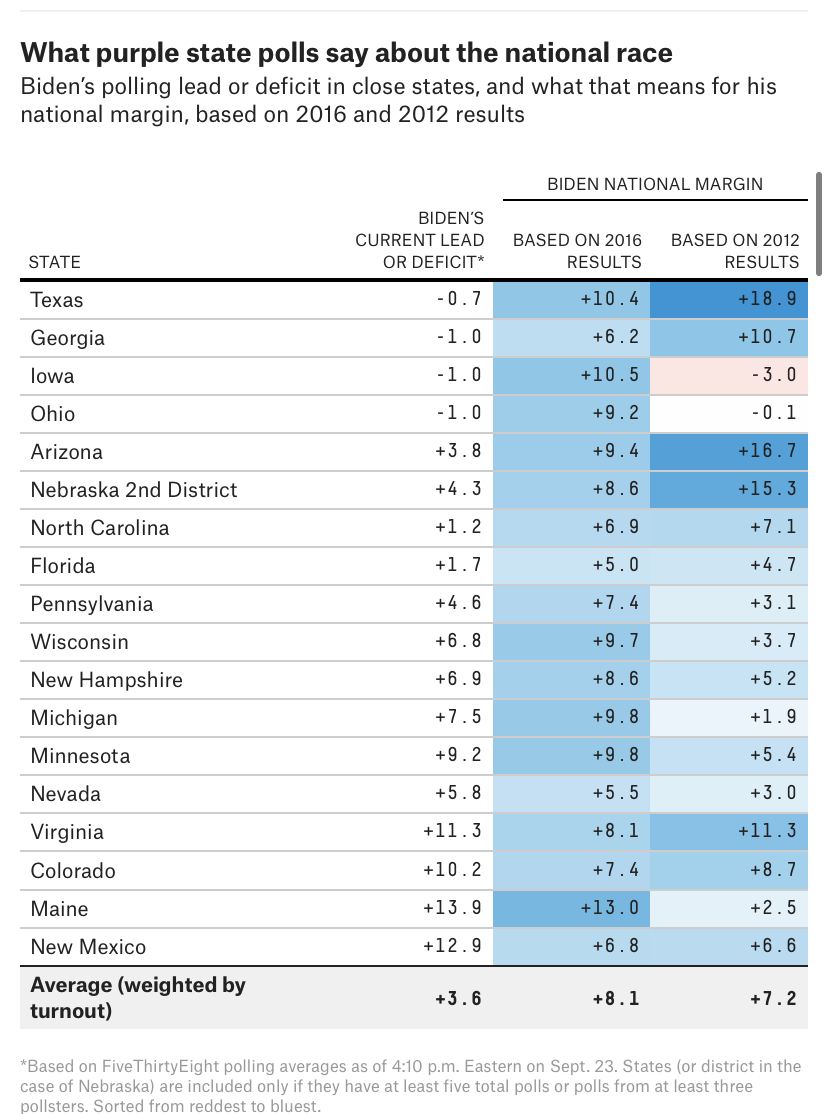 This map shows competitive states that range from highly contested Florida to a potentially competitive New Mexico. Biden’s lead is compared to the leads of Clinton and President Obama in 2016 and 2012 and showed a projected national average. For instance, it showed Biden leading in Wisconsin by 6.8 points.

“In 2016, for instance, Wisconsin was about 2.9 points more Republican than the nation, so having a 6.8-point lead there would imply that Biden had a huge 9.7-point lead nationally. But in 2012, Wisconsin was 3.1 points more Democratic than the country overall, so a 6.8-point lead would imply only a 3.7-point national margin,” Silver said. Based on the chart, Biden looks as if he has an 8-point national lead if the 2016 version is used or a 7.2-point lead with a 2012 version.

It is unclear whether The New York Times Sunday report regarding President Trump’s tax returns, which allege he only paid $750 in federal income taxes in 2016 and 2017, will be mentioned.

* These polling averages and probability chances are a snapshot of Thursday, September 24th.

Johnathan Miller (Twitter: @JMiller_NJ) is a senior political science major from Lacey, N.J. He is glad to join the Equinox in covering the 2020 Presidential Election for students and to help students understand and participate in the political process.