Being a student-athlete is already complicated. And now? It might just get a lot more complicated.

FDU is going through a major reorganization, and its full impact on Metro’s NCAA Division I athletes has yet to be determined. The changes take effect in the Fall 2020 semester.

Geoffrey Weinman, Dean of the Maxwell Becton College of Liberal Arts and Sciences, said “that student-athletes would be taken care of in the transition.

“Students will have an option to follow the new curriculum if it works out for them,” Weinman said. “If they’ve moved along already, if they’re juniors and seniors, we are not going to tell them ‘well now you need to go back and take this.’ We will honor the curriculum that existed when they started,” he said.

The transformation includes the end of University College on the Metro campus and the distribution of its programs to the Maxwell Becton College of Arts and Sciences, which will now operate on both campuses, or to one of seven independent schools publicized with the launch of a new FDU website last week. Silberman College of Business continues to operate with the same name on both the Metro and Florham campuses.

New concentrations in many programs are being implemented, and changing majors will become more complicated after July 1.

The appointment of Weinman as the dean of the Maxwell Becton College of Arts and Sciences with authority over both campuses was a key part of FDU’s plan to unify the academic offerings of both New Jersey campuses, Metro and Florham. The first step in the process was changing the class schedule on the Metro campus, which was initiated last fall.

“The scheduling of class times has also been unified,” Weinman said. “In the past you couldn’t shift from one campus to the other because the times were so different.”

Adjusting to the new schedule wasn’t easy for everyone, and it posed particular challenges for Metro’s Division I student athletes.

“The change to the Monday-Thursday and Tuesday-Friday schedule has been difficult in limiting class time,” Associate Athletic Director for Compliance and Academics Jennifer Quirk told The Equinox. “It is not best to overwhelm them with so many classes in one day.”

Quirk said the university will continue to support its student-athletes.

“For continuing students, the college will likely work with them,” she said, “to ensure their degree can be completed with the necessary coursework.”

Students will have the option to follow the new curriculum if it works for them. If it doesn’t, some may choose to transfer to another college or university.

And what about recruiting?

“The change from University College to the College of Arts and Sciences should not impact recruiting,” Quirk said. “Unless certain majors stop being offered.”

Curriculum changes could impact recruits who have signed a National Letter of Intent (NLI) with FDU. But changing schools is not simple under NCAA rules.

“If a recruit has signed an NLI, they would need to request a release to be able to speak to other schools if their major is no longer offered,” Quirk said. 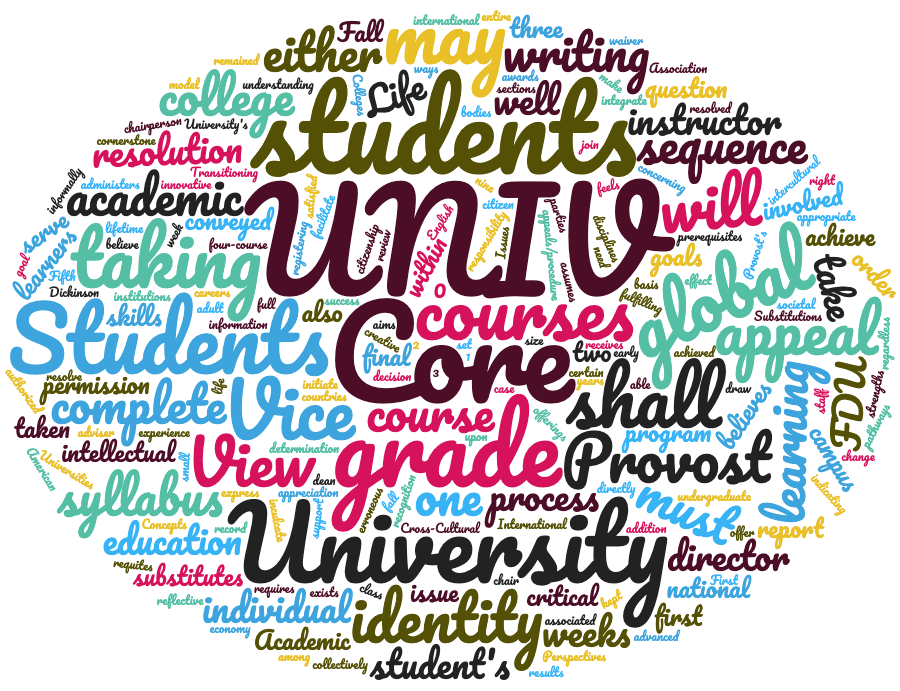 This graphic was designed by taking the text from fdu.edu/academics/undergraduate/university-core-curriculum and making it into a word cloud.