“Rhythm + Flow,” Netflix’s most anticipated rap show of the year, featuring T.I., Cardi B and Chance The Rapper, dropped in early October.

The rap competition, in T.I.’s words, takes the audience on a trip to “all the hoods, all the hip-hop studios, all the nightclubs” in New York, Los Angeles, Chicago and Atlanta to discover the next authentic, underground hip-hop superstar.

“Rhythm + Flow” is Netflix’s first venture into the talent reality TV landscape, the home of XFactors, The Voice and American Idol.

The show has plenty of dramatic cutaways to showcase the contestants’ often chaotic and messed up background – a signature of American reality TV.

The concept of authenticity and credibility that is critical to the success of hip-hop artists sets the show apart from its music competition predecessors.

A majority of the participants come from the street and use street influences in their music.

But there are still hidden gems with unique styles such as Old Man Saxon, a rapper dressed in customized suits who spits funny, witty intellectual bars, and D Smoke, a high school teacher who rhymes in both English and Spanish.

The job of the three celebrity judges is to eliminate people in the audition and challenges like rap battles and ciphers. Music video production to find the $250,000 prize winner and a spot on Spotify’s Rap Caviar Live tour.

In an Instagram video, Cardi B added that she was looking for “that diamond in the rough.” As judges provide guidance to the contestants along the way, the show  showcases of their distinct charms as renowned hip-hop artists.

Chance, for example, is upbeat and down-to-earth, while T.I. is money-minded. Cardi B never fails to make everyone laugh with her nonchalant and splashy comments.

The final episode crowned D Smoke, a bilingual high school Spanish teacher who aced previous rounds of the competition, the winner. The Inglewood, CA., rapper deserved to walk away with a $250,000 cash prize with “Last Supper,” a song about Jesus’s last meal with dancers. 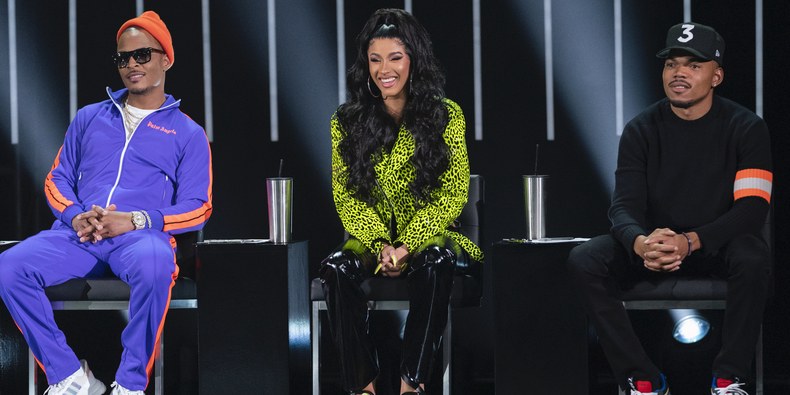 T.I., Cardi B and Chance The Rapper host the rap show “Rhythm + Flow.”