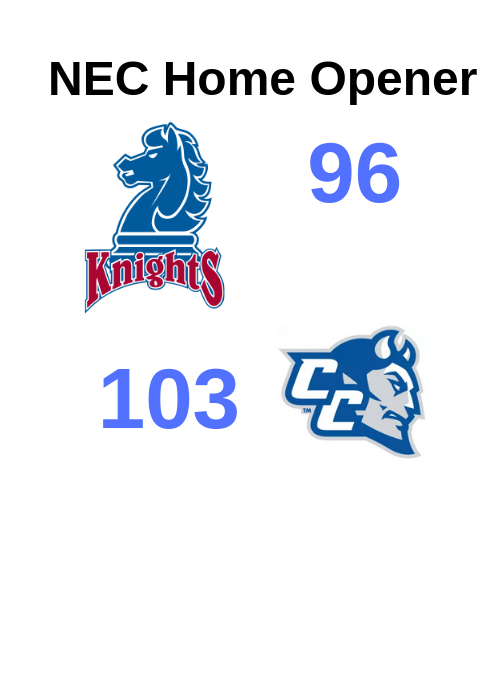 By Justin Rimpi and Anthony Covino

Fairleigh Dickinson came back from 18- and 20-point deficits but was unable to finish Central Connecticut State University in a 103-96 double-overtime loss Thursday at the Rothman Center.

“Give (CCSU head coach) Donyell (Marshall) and his team all of the credit,” Coach Greg Herenda said. “They played better and made more tough plays than we did all night long. Our guys never gave up but that doesn’t win you college basketball games. What does is playing with energy, urgency, and extreme passion and we did not do that to the best of our ability tonight.”

The Knights seemed to run out of gas in the second overtime period as they were outscored 21-14 while shooting 42 percent from the floor. The Knights lost senior guard Darnell Edge and sophomore forward Elyjah Williams to fouls while senior forward Michael Holloway Jr. and sophomore guard Xzavier Malone-Key played with four.

The Knights dressed nine players with five logging over 30 minutes. Sophomore guard Jahlil Jenkins played 49 of a possible 50 minutes. Jenkins finished with a team-high 25 points on 9-for-19 shooting from the floor.

The Knights get back on the floor Saturday Jan. 12 as they travel to Staten Island, N.Y. to play NEC foe Wagner at 4:00 p.m.

Senior guard Darnell Edge sent the game into overtime as he banked in a three-pointer as time expired for a 73-73 deadlock. Edge, averaging 16 points a game, finished with 18 points and fouled out early in the first overtime.

Without Edge, FDU chased Central Connecticut State for most of the period. Then, with 27 seconds remaining, Williams slammed the ball home off a break ignited by a blocked shot by Holloway to knot the count at 82-82

Central Connecticut guard Ian Krishnan, a freshman from Boyds, Md., poured in eight points in the first overtime for a total of 27. Senior guard Tyler Kohl from Allentown, Penn., added another 27 for the Blue Devils.

Holloway missed both free throws with the Knights ahead 70-69. A turnover from Holloway with 4.8 seconds remaining led to a dunk by senior center Deion Bute to put CCSU up 71-70.

After two made free throws by the Blue Devils, the stage was set for Edge to send the game into an improbable overtime.

The Knights got off to a sluggish start as they fell behind by 20 points, 31-11, with just over seven minutes remaining in the first half, after surrendering 20 unanswered points to the Blue Devil and missing nine consecutive shots.

The Knights shot 38.5 percent from the field in the first half while committing 10 turnovers.

Williams led the Knights with seven points in the first half.

The Blue Devils were led by junior forward Joe Hugley from Gaithersburg, M.D. who scored 11 points in the first half.

The Blue Devils began the second half the same way they began the first half as they outscored the Knights 16-7 to lead 55-38.

Malone-Key was inserted back in the game with four fouls with just over 10 minutes remaining in the second half causing the Blue Devils to attack Malone-Key defensively to try to get the Knights’ best 3-point shooter (40 percent from the 3-point-arc) to commit his fifth and final foul. This proved an unsuccessful strategy as Malone-Key was able to play the last 20 minutes without penalty.

The injury bug has bitten the Knights all throughout the season, and tonight’s game was no different. Senior forward Nadi Beciri and freshman forward Marc Dadika were both inactive tonight due to injury.

Attendance at the Winter Break game was 327, according to FDU.