Spider-Man PS4 Swings into the Spotlight

This year we have seen the release of big triple A titles such as God of War (2018), Far Cry 5, and Monster Hunter World. Other big games that have yet to be released include Red Dead Redemption 2, Super Smash Brothers Ultimate, and Call of Duty: Black Ops 4.

However, only one game can be considered the game of the year. With the heights developer Insomniac Games have reached with the Sept. 7 release of Spider-Man, it would be tough to see any other game earn the award over them.

The biggest selling point for Spider-Man is the thrilling open-world experience that puts you in the shoes of everyone’s favorite NYC wallcrawler.

The entirety of the game takes place in a virtual Manhattan that is full of life and beautiful scenery. The game features real landmarks such as the United Nations headquarters and the Municipal Building. Players can swing through locations like Central and Union Square Park, as well as scale skyscrapers like the Empire State and Chrysler Building.

Various fictional Marvel themed locations can also be visited such as Avenger’s Tower and the Wakandan Embassy.

Not only does the city look breathtaking, even while played on a base Playstation 4, the roaming citizens add plenty of life to a single player campaign which makes you feel like the city is yours to defend and explore.

As you progress through the game, artificial citizens will interact with you as you swing or run by. The game contains a fake twitter feed where people will post reactions to the choices made by the player.

De Paul delivers hilarious Alex Jones themed lines as he tries to paint Spider-Man as a menace to the city and show how both his fans and critics are reacting to the player’s actions throughout the game. 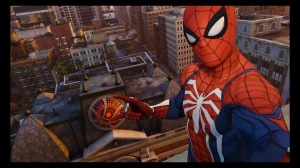 Spider-Man at the Sanctum Sanctorum

Despite the game being condensed into just a single player experience, the various character interactions throughout the game never makes you feel as if you are alone in this open-world adventure.

Gameplay is divided into two segments, web swinging and combat. Both features are designed to be easy to learn and hard to master. The combat is incredibly reminiscent of the Rocksteady Studios Batman games with similar dodge, combo, stealth and gadget mechanics.

Where button mashing is an acceptable strategy in most superhero games, taking the same route will only get you killed in Spider-Man. Even low-level street thugs can seriously threaten you when grouped together. It’s up to the player to utilize their gadgets and abilities, link clever combos and to strike at various weak points to came out of every challenge victorious.

Web swinging has always been the key feature to defining any Spider-Man game. The huge success of the web swinging mechanic introduced in the 2004 movie tie in game Spider-Man 2 is the reason why the game has been regarding as the best Spider-Man game of all time, until now. The real fun in Spider-Man begins once you learn about the complexity behind the system and the various options at your disposal.

The game is set up for the player to always keep moving forward. A big factor is web swinging and sprinting both being linked to the same button, R2.

“Your R2 button is really your go button,” Insomniac Games Director Ryan Smith said in an interview with Game Informer.

When the player is about to face plant into a building from a swing, Spider-Man will automatically start sprinting up that wall, and the player can decide what direction to run in from there or what Spider-Man will do once he reaches the roof of the building. You can launch yourself straight into the air or throw a line onto the roof to fling Spider-Man forward and keep up that forward momentum.

Peter Parker is voiced by Yuri Lowenthal (also the English voice of Sasuke Uchiha) and his delivery is second to none.

His voice acting is another major reason why Spider-Man is a game that delivers the full Peter Parker and Spider-Man experience. For most of the game it makes you wish you were Spider-Man, experiencing exhilarating action and traversal sequences, all while Spider-Man delivers funny quips in his traditional style.

The main story is the most compelling story of Spider-Man in any medium outside of the comic books. It follows a three-act structure and delivers captivating moments at every turn.

Peter is 25 years old when the story takes place. Free from the struggles of college and high-school, but still trying to balance making rent with his superhero duties. Viewing the world through his perspective brings the player back down to earth and successfully immerses you into the story and with Peter’s relationships with the other main characters.

Another vital part of any open-world game is the freedom of choice and customization. After the first intro mission, the entire city is opened up to the player to explore and find collectibles.

As you play through the game, over 20 different costumes can be unlocked. The suits come from the comics, movies, and a few are Insomniac Games original designs. Most suits come with a special ability that can mixed and matched with other suits to give the player the freedom of look and play style.

The final cherry on top is the photo mode. Included in a day one patch, photo mode allows the player to freeze the game and use a variety of customization tools to set up interesting and creative screenshots.

Players can then use the share button on their controller to save the picture to the console and then move that photo onto their devices or to directly share their pictures on Facebook or Twitter.

Spider-Man is a serious contender for Game of the Year. The original story can be completed in roughly 30 hours but the game offers so much extra content that it will consume all of your free time.