The FDU Men’s Basketball team played their first home game of the season against their sister campus, FDU Florham.

Metro had some key players and scoring leaders which were pivotal in their victory against Florham.  One of these players, sophomore forward Mike Holloway, led the team as they successfully defended their home territory.

The game began with the opening tip as both teams competed to score the first set of points.  Both the Knights and the Devils applied substantial defensive pressure in the opening half.

Metro junior guard Darian Anderson made a great jump shot, providing his team with their first points of the game.  After a missed jumper by Florham sophomore guard Darren Davey, the Knights rebounded and Mike Holloway made an explosive dunk.  With the Knights now up 4-0 at the start of the half, Darren Davey made a layup which put the Devils on the scoreboard.

FDU then put together an effective scoring drive which included 10 consecutive unanswered points.

Holloway, who led this drive, made three layups and another dunk at the end.  After a steal by sophomore guard Darnell Edge, Anderson was able to make another jumper.  With only 50 seconds left in the half, Florham senior forward James Morgan made a three pointer followed by a jump shot made by teammate Alex Hanssen.

The Knights ended the first half with a 26-point lead over the Devils.

The second half opened up with even more aggressive scoring. The Knights’ defense was able to shut down Florham’s offense, which created an even larger gap in the final score.

Anderson started the second half with a three pointer, putting FDU up by 29 points.  With 19 minutes left to play, Holloway dunked the ball yet again after an assist by Knights junior guard, Stephan Jiggetts.

The Devils took the narrow scoring opportunities that were available to them.  Florham senior forward, Veon Ali made a jump shot with only a few minutes remaining.  However, it wasn’t long until FDU sophomore forward, Nadi Beciri made two free throws contributing to the Knights’ excessive lead. 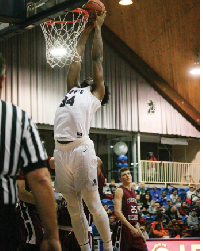 Mike Holloway hits one of his many dunks of the night in the Knights’ 96-48 win over the FDU Florham Devils.

As the game came to a close, Beciri made two more free throws after a foul committed by freshman guard, Joe Duffy.  With 46 seconds left on the clock, Knights freshman forward, Kaleb Bishop dunked the ball, sealing their final 96-48 victory over the Devils.

In his game against Florham, Holloway scored a career high of 25 points.  He also proved extremely efficient as he scored these points in only 17 minutes.  He also went 12 for 14 in field goals and managed to get eight rebounds.

Anderson trailed Holloway with a 19-point game, along with Kaleb Bishop who scored 12 points that evening.  As a team, FDU made eight steals and had a total of 54 rebounds.

The Men’s Basketball team went on the road on Nov. 30 to play Army West Point at 7:00 p.m.  The knights will need to keep using their aggressive offensive scoring as well a strong defensive strategy in order to continue winning.

With the NEC Tournament approaching in the next few months, Metro must remain consistent in order to become champions for a second straight season.  Much to the Knights’ advantage, the recent signing of their new player Jahlil Jenkins, will also prove a useful weapon on Coach Herenda’s team.